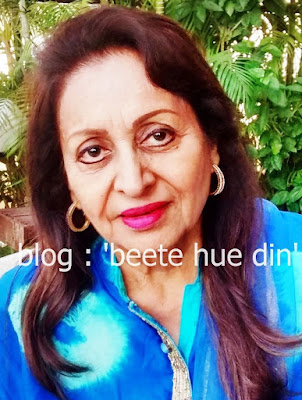 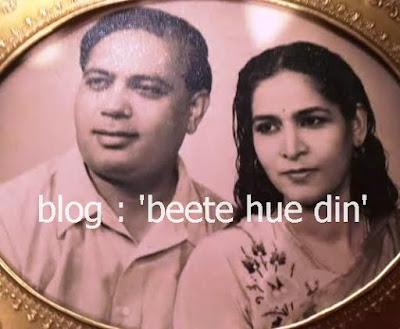 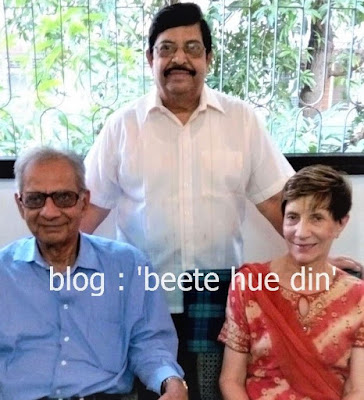 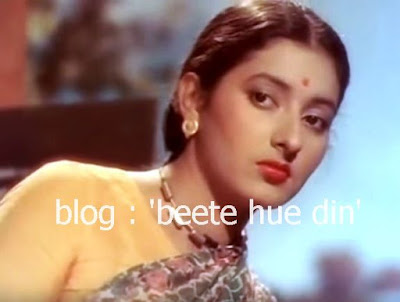 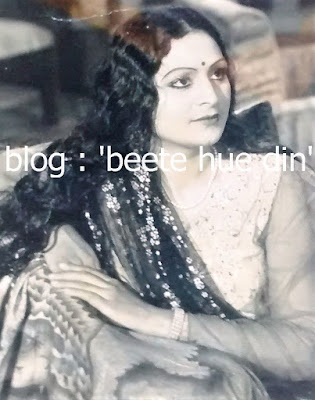 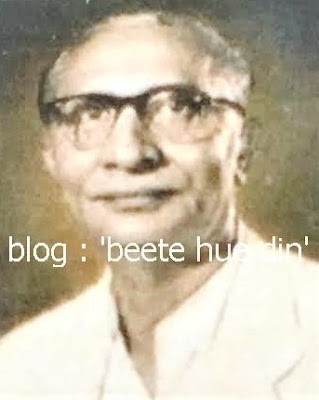 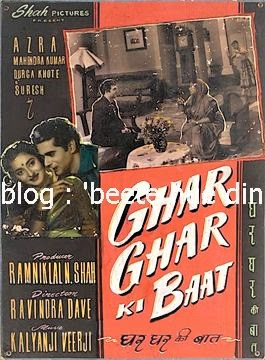 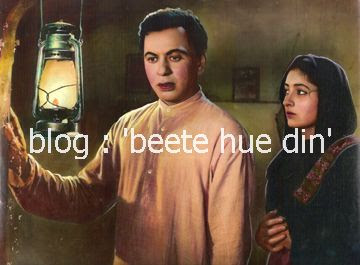 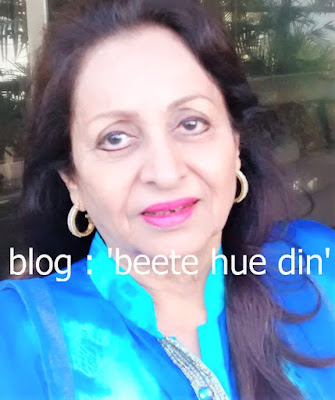 We are thankful to –

Mr. Gajendra Khanna for the English translation of the write ups.

Mr. Manaswi Sharma for the technical support including video editing.

Jayrajbhai is an entrepreneur who specializes in finding and retrieving the negatives and prints of long-lost movies. One day, sitting in the same room, I was busy talking with Jairajbhai when he suddenly started talking about the movies of famed producer-director Nanubhai vakil of the bygone era. That day I came to know that the actress Azra who is known for her movies like ‘Mother India’ and ‘Love in Simla’ is Nanubhai Vakil’s daughter and she still resides in Mumbai though her name had vanished from my memory long back.

When I expressed my desire to interview Azra ji, Jayrajbhai gave me her mobile number but also mentioned that Azra ji was living a peaceful retired life after she bid adieu to the filmdom and whatever efforts I put, she wasn’t likely to give any interview. When Azra ji’s close friend and well-known actress-dancer of the 1960’s and 70’s Bela Bose ji also expressed the same view, I lost all my hopes.

One fine day I received an e-mail from Mr. Salim Shah of U.S. a couple of months back. He wrote that he was an avid reader and admirer of ‘Beete Hue Din’, would be reaching India for a couple of days in the first week of December (2015) and would love to meet with me during the said trip to India. His self-introduction in the mail was quite impressive and encouraging.  He wrote that he was the son of star actress of 1930’s & 40’s Indurani and producer-director Ramniklal Shah who was the owner of Mohan Studio and would be staying with his cousin (his maternal aunt’s daughter) Azra as always.

It was a pleasure to meet with Shri Salim Shah and his wife (of French origin) Smt. Francoise Shah at well-known film historian & writer Shri Arun Kumar Deshmukh’s home at Seven Bungalows, Andheri (West) in the afternoon of 6th December 2015. After spending initial 22 years of his life in Mumbai Shri Salim Shah shifted to U.S. in 1960. He shared his memories of the film world of those 22 years with us during our meeting and also gave us lots of rare information on film personalities of that time including his mother and maternal aunt (Mausi). While parting, he invited us to Azra ji’s place where he was staying. But he didn’t promise me any fulfilment of my desire to interview Azra ji. Probably he was aware that it wouldn’t be easy to persuade Azra ji for the same.

It is in one of West Mumbai’s poshest areas. It was a huge terrace flat on the topmost floor of a Highrise on the shore of the Arabian Sea. Shri Salim Shah and his wife introduced me to his two younger sisters who also reside in the U.S.  They too were avid readers and admirers of ‘Beete Hue Din’. Their warm welcoming nature didn’t make me feel that I was meeting with them for the first time. Azra ji also joined us soon and then readily agreed for the interview. I would like to give credit for this, possibly only interview of Azra ji’s in the 4-1/2 decades of her retirement solely to Shri Salim Shah who had already made a very positive atmosphere in favour of ‘Beete Hue Din’. Simultaneously, I would also thank Azra ji for her cooperative stance.

Delhi’s Sheikh Imamuddin and his wife Munavvar Jehan’s  two daughters Roshan Jehan alias Rani and younger one Ishrat Jehan  among 7 of their children had established themselves as the star actresses of fantasy films of the 1930s and 40s. Roshan Jehan’s screen name was Sarojini and she debuted in 1934 with the film ‘Deewani’. Over a career of 12 years, Sarojini acted in movies like ‘Bharat Ki Beti’, ‘Sundari’, ‘Madhu Bansari’, ‘Sansaar Nayya’, ‘Son Of Alladin’, ‘Deepak Mahal’, ‘Hatimtai Ki Beti’, ‘Jadui Kangan’, ‘Sanskar’, ‘Jadui Bandhan’, ‘Taj Mahal’, ‘Farmaan’, ‘Naya Zamana’, ‘Shri Krishnarjun Yuddh’ and ‘Circus king’. Meanwhile, she also secretly married famed producer-director Nanubhai Vakil known for the production of fantasy movies. Azra is the daughter of the same Sarojini and Nanubhai Vakil.

Azra ji says, “I was born on 21st September in Mumbai. After passing my 6th standard from St. Teresa Convent High School, Santacruz I shifted to Delhi to live with my maternal grandmother in 1950. During my five year stay in Delhi, I completed my schooling from St. Francis School of Pahadi Bhojla – Chitlikabar – Jama Masjid area and then returned to Mumbai in 1954-55.”

Azra ji’s joining the film industry happened by chance. She recalls, “I was studying in B.A. first year at Jogeshwari’s Ismail Yusuf College. One day I went to attend a marriage function at Aryasamaj Mandir, Santacruz where Mehboob Khan’s wife Sardar Akhtar was also present. She was a very close friend of my maternal aunt (mausi) Indurani. When she saw me, she told my mausi, “Your niece is very beautiful” and the matter ended there only. But three-four days later Sardar Akhtar made a phone call at my home. I had gone to my college at that time and the same evening we, the family had to leave for Ajmer to join my father who was shooting there for one of his films. Heroine of that film was Chitra. Sardar Akhtar left a message for me in which she had asked me to reach Mehboob Studio as soon as I reach home from my college.”

When Azra ji reached Bandra (west)’s Mehboob Studio, She found that the shooting of ‘Mother India’ was going on there. The girl who had been signed for the role of ‘Chandra’- the ladylove of Birju (Sunil Dutt) was in Lucknow had suddenly taken ill and couldn’t reach Mumbai for the shoot. That’s how Sardar Akhtar called Azra ji to take up the part, who, without any planning, became an actress. Azra ji says, “I had never even applied lipstick and here I had to apply full makeup for a movie! When Nargis saw my dilemma, she helped me to tie my hair in a braid. I started shooting for ‘Mother India’ in the year 1956 and this film released in 1957.”

Azra ji’s next ‘Taxi 555’ released in 1958. She played the second lead in this movie which had Pradeep Kumar and Shakila as the main leads. Her debut movie as the main heroine was the 1959 release ‘Ghar Ghar Ki Baat’ which was produced by her uncle (Mausa) and Shri Salim Shah’s father Ramniklal Shah. But both these movies failed to impress the audiences. Azra ji had 2 releases in the year 1960.  One of them was ‘Babar’ which was made under the banner of ‘Filmistan’ and the other was ‘Love in Simla’, produced under the banner of ‘Filmalaya’. ‘Filmalaya’ was founded by Sasadhar Mukerjee after he parted ways from ‘Filmistan’ two years back. He had already made two movies made under this banner, namely, ‘Dil De Ke Dekho’ (1959) and ‘Hum Hindustani’ (1960).

‘Love in Simla’ was the debut movie of Joy Mukerjee and Sadhna both in main lead. Azra ji played the second heroine in this movie. A super hit movie of its time, ‘Love in Simla’ helped Azra ji gain the attention of the audience. However, her career lasted just 15 years. She, for he most part, acted in second heroine and character roles in around two dozen movies viz. ‘Junglee’, ‘Ganga Jamuna’, ‘Ganga Ki Lehrein’, ‘Ishara’, ‘Baharon Ke Sapne’, ‘Bandish’, ‘Wapas’, ‘Raja Saheb’, ‘Mahal’, ‘My Love’ and ‘Ilzam’ and finally bid adieu to Filmdom after she got married. In ‘Ganga Jamuna’, she was the second lead opposite Nasir Khan. Movies ‘Shaan-e-Khuda’ (1971) and ‘Pocketmar’ (1974) released after her marriage. ‘Shaan-e-Khuda’ was directed by her father Nanubhai Vakil.

Azra ji says, “In January 1971 I got married into one of Mumbai’s well known business families. No one at my in-laws’ home had any relation with the film world nor did they want to keep any such relation. For this reason, I also preferred to cut off all my ties with the film world. Dev Anand, with whom I had worked in ‘Mahal’ had also offered me a role in one of his films but I had to politely decline his offer also. Post marriage I completed my remaining work and then bid adieu to the film world forever.”

Azra ji is known as ‘Farhana’ today. Her younger sister Rehana is a U.S. citizen. Rehana worked with Indian Airlines. After marriage, she shifted to America where she served the U.S. Airforce for 25 years and is retired now. Azra ji’s father Nanubhai Vakil died on 29th December 1980 and her mother Sarojini died in the year 1993. Azra ji’s aunt Indurani lived with her son Salim Shah in America where she died in the year 2011. Salim Shah’s father Ramniklal Shah had passed away much earlier in July 1973.

The meeting with Azra ji and her interview were no less than a miracle for blog ‘Beete Hue Din’ and this miracle happened only because of Shri Salim Shah. However, there was yet another miracle to happen and the credit for this miracle goes to Azra ji.  And this was that miracle: – https://beetehuedin.blogspot.com/search/label/actress%20%3A%20Shakila

Posted by shishir krishna sharma at 9:43 AM